A Model of the Universe

Ancient Egyptian temples were not just homes for the gods, they were also replicas of the universe at the moment of creation. In Egyptian mythology, the universe emerged from a vast cosmic ocean of nothingness. For countless eons, the creator-sun god Atum had drifted asleep in this primordial sea which the Egyptians called Nun. Eventually, the creator god awoke and willed a small island to emerge from out of the cosmic sea. From atop this hill, which the Egyptians called the mound of the "First Event," Atum proceeded to call all things into existence starting with the male god Shu (the air) and the goddess Tefnut (moisture). Next came a third generation of deities in the form of the male earth god Geb and the sky goddess Nut. After further generations, every feature of nature was born, each with a god or goddess to govern it. 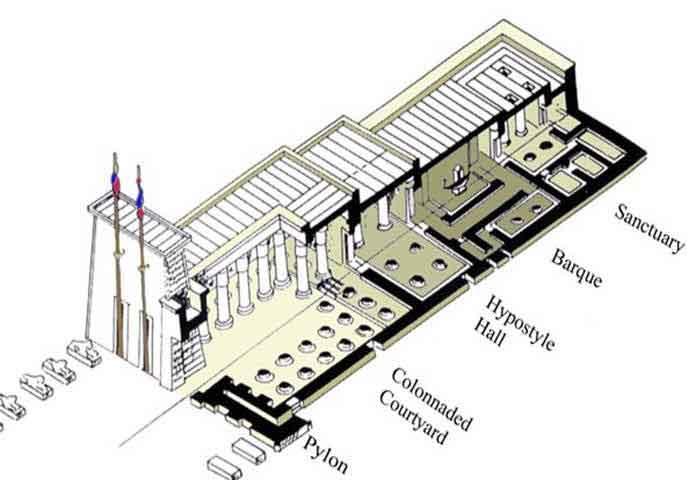 Drawing of the layout of a typical Ancient Egyptian temple.

Egyptian temples were replicas of this early universe with inner sanctuaries representing the primeval hill. As visitors moved from the outer courts, through the hypostyle hall and into the holy of holies, the floor level gradually rose while the ceilings became lower. It also became darker as the open roofed courts and the hypostyle halls with their clerestory windows gave way to dark inner chambers with just one small light shaft in the inner chapel to illuminate the god's cult statue. This confined and shadowy atmosphere transported the visitors privileged enough to see the god in his home back to the very beginning of time—but just a few priests and Pharaoh himself could enter this holy of holies. Within this sacred model of space and time, a hypostyle hall mimicked a thicket of papyrus reeds that grew in the swampy edges of the primeval mound.