Central to these festivals were magnificent processions in which priests transported the golden, bejeweled cult statues of the gods within a type of portable shrine. Taking the form of miniature boats called sacred barks, these model vessels were covered in gold foil and encrusted with precious gemstone inlays of lapis lazuli, turquoise, and carnelian. Each deity had his or her own sacred bark which priests transported over land on platforms with several long carrying poles. Two impressive figureheads at the prow and stern of each bark identified its owner. Amun's bark had ram's head figureheads since that animal was sacred to him, Mut had a woman's head fore and aft, each wearing the Double Crown, and Khonsu had falcon's heads with lunar crescents and disks. 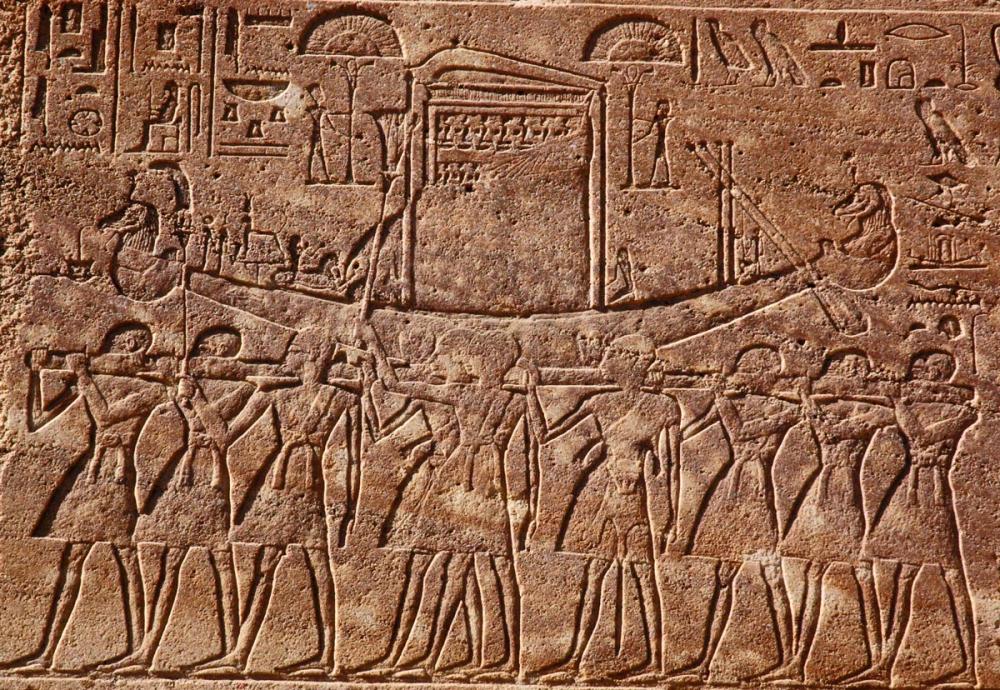 The procession of Amun-Re's divine bark. Relief from the Red Chapel of Hatshepsut.

Festival processions departed from the inner sanctum of Karnak and advanced along sacred avenues towards Luxor Temple or to waiting river barges that conveyed them further upriver to Luxor or across the Nile to the royal memorial temples on the West Bank of Thebes. Occasionally, the gods—not to mention the priests supporting them—needed to rest from the heat and dust of their tiring journeys. Many pharaohs, therefore, kindly provided them with convenient resting shrines along the way. Never missing a chance for self-promotion, the king would name the wayside shelters after himself and would remind the gods of his piety in temple inscriptions and representations describing them. For example, scenes on the "Red Chapel" of the female pharaoh Hatshepsut (ruled ca. 1473-1358 BCE) at Karnak depict several wayside shrines that she erected between the temple complexes of Karnak and Luxor.

Depiction of a wayside shrine built by Hatshepsut. Relief from her Red Chapel.

Egyptian gods and priests were apparently never in a hurry to reach their destinations, nor did they pass up any opportunity for taking advantage of these resting areas. Scarcely had Amun-Re left his sanctum when he came to rest from his exertions on his very own front doorstep. The great First Court of Karnak possesses at least three resting shrines built by the pharaohs Sety II (late 19th Dynasty 19), Ramesses III (early 20th Dynasty), and Taharqa (25th Dynasty) for the use of sacred barks and their priestly cortège. The first of these resting shrines both in date and location was built by Sety I, who intended that his Great Hypostyle Hall should grant Amun-Re a rest stop before he had even left his own "living room." Architrave dedication texts in its nave describe the Hall as "a resting place" and a "place of appearance for the Lord of the Gods (i.e. Amun), with Mut and Khonsu following him, to rest in his monument." Sety claims he built it as "a beautiful resting-place for the Divine Conclave in which Amun may repose and as a place of appearance for the Lord of the Gods during his yearly festival." Inscriptions such as these emphasize the key role the Great Hypostyle Hall played in the grand sacred promenades at the heart of major celebrations like the Opet and Valley Festivals.