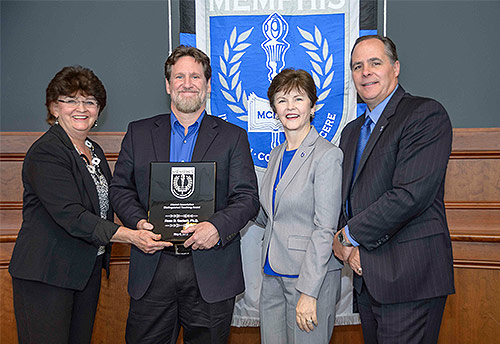 Sackett is an evolutionary anthropologist in Interdisciplinary Studies and also teaches courses in the Department of Anthropology. The son of a Paleolithic archeologist, his early experiences excavating Cro-Magnon and Neanderthal archeological sites in southern France began a lifelong fascination with human origins and the evolution of society and cultural activity systems. He has conducted archeological and ethnographic fieldwork in the U.S., physiological and nutritional research among the Yukpa Indians of Venezuela, and with his wife, Dr. Ruthbeth Finerman, has spent more than three decades investigating the household adaptations of the Saraguro Indians in the highlands of Ecuador. (Photo left to right: Anita Vaughn, Ross Sackett, Dr. Shirley Raines, and Dr. David Rudd)

Sackett says his greatest academic challenge – and satisfaction – has been teaching human beginnings to students of diverse backgrounds, most without prior exposure to the evolutionary sciences or anthropology. He enjoys punctuating his evolution lectures with physical "full-body" demonstrations; years later many students still recall his notorious re-enactments of early mammalian and primate locomotion patterns. He also serves as undergraduate advising coordinator in the Department of Anthropology.