Celebrating the Civil Rights Movement and Its Legacy

The Hooks National Book Award is presented annually to a non-fiction book that best furthers understanding of the civil rights movement and its legacy.

"Franchise: The Golden Arches in Black America” by Marcia Chatelain 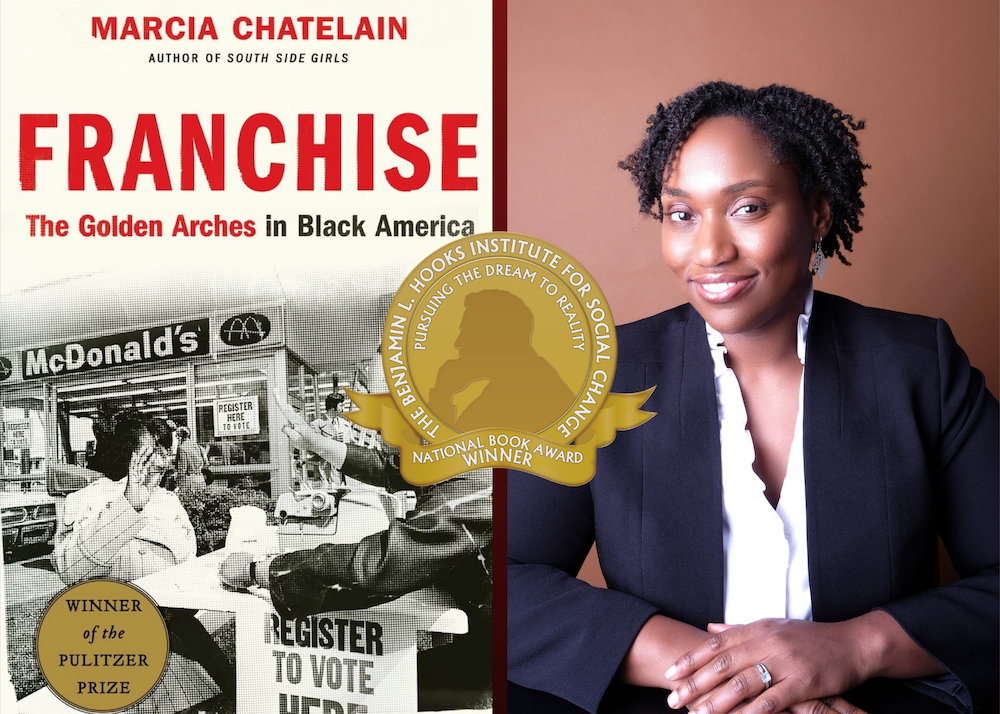 Join the Hooks Institute for a lecture by Marcia Chatelain on her 2020 Hooks National Book Award winning work "Franchise: The Golden Arches in Black America."

While this event is free and open to the public, attendees are encouraged to RSVP here.

“Since it started in 2010, the annual book award given by the Benjamin L. Hooks Institute for Social Change has attracted outstanding nominations,” said Aram Goudsouzian, Bizot Family Professor of History at the University of Memphis and chair of the Hooks National Book Award Committee. “This year, the overall quality of the five finalists was exceptional. Each book made a significant contribution to civil rights history while speaking to audiences beyond academia, which is increasingly critical in our current age of racial reckoning and conflict. Marcia Chatelain’s ‘Franchise: The Golden Arches in Black America’ stood out to the book award committee for the depth of its research, the quality of the writing and especially for its astute analysis.”

“Franchise” is a model for how to analyze the complex effects of capitalism in African American life.

The Hooks National Book Award Committee chose “Franchise: The Golden Arches in Black America” from 28 books nominated for the 2020 award. Other finalists included:

For questions or comments: Please contact Rorie Trammel, Associate Director of the Hooks Institute, at 901-678-3974 or via email at rtrammel@memphis.edu.

About the Hooks Institute

The Benjamin L. Hooks Institute implements its mission of teaching, studying and promoting civil rights and social change through research, education and direct intervention programs. Institute programs include community outreach; funding faculty research initiatives on community issues; implementing community service projects; hosting conferences, symposiums and lectures; and promoting local and national scholarship on civil and human rights. The Hooks Institute is an interdisciplinary center at the University of Memphis. Contributed revenue for the Hooks Institute, including funding from individuals, corporations and foundations, is administered through the University of Memphis Foundation, a 501(c)(3) organization.

Occupied Territory: Policing Black Chicago from Red Summer to Black Power, is a powerful work of history that speaks directly to our current crisis over race and policing. Occupied Territory is meticulous and engaging with conclusions that are provocative and convincing. It informs a national conversation about the racist foundations of the criminal justice system. Balto chronicles how, since the Great Migration of African Americans to northern cities such as Chicago, policing served as a brutal form of racial discipline. Despite the protests of Black Chicagoans, those practices continued over the course of the twentieth century.

2018 | An American Odyssey: The Life and Work of Romare Bearden

An American Odyssey provides a telling biography of the artist Romare Bearden, whose iconic collages conveyed the richness and complexity of African American life in the civil rights era. As Campbell demonstrates, Bearden’s work transcended the visual stereotypes of African Americans. He situated his characters in a deep past, while employing a modernist style that was re-envisioning the black experience.

2017 | Locking Up Our Own: Crime and Punishment in Black America

By James Forman, Jr.
Press Release: Locking Up Our Own

In his remarkable book, Forman argues that the disproportionate impact of long prison sentences on African American communities was not shaped solely by whites, but in part by the exasperation of some African Americans who urgently demanded action to deescalate crime in their communities related to drugs. Forman encourages a candid examination of the forces that created draconian criminal sentences related to drugs to encourage honest and transformative reform of the criminal justice system.

2016 | We Are an African People: Independent Education, Black Power, and the Radical Imagination

By Russell Rickford
Press Release: We Are an African People

In the midst of the more well-studied educational changes of the school desegregation era, a handful of "Pan African nationalist" independent black schools emerged as an alternative mechanism for African-American uplift. We Are an African People examines the ideas and motivations behind these autonomous black institutions and places them within a broader discussion about how best to achieve liberation for the next generation of African Americans. Rickford's work expands upon the understanding of a very specific topic within the quest for the intellectual liberation of African-Americans and grapples with very broad questions about education, freedom and the diversity of viewpoints during the civil rights era.

2015 | Eye On the Struggle: Ethel Payne, the First Lady of the Black Press

By James McGrath Morris
Press Release: Eye On the Struggle

Morris' biography excavates the story of Ethel Payne, a journalist whose work for the Chicago Defender during her multi-decade career provided a lens to thousands of African-American readers into the action of the civil rights movement and beyond. Covering the school desegregation crisis in Little Rock, interviewing black troops in Vietnam or quizzing multiple presidents during her years at the White House, Payne's career demonstrated the role journalists could play both in helping to build a movement by informing the public and in furthering that movement by putting pointed questions to those in power.

In the 1960s, Civil Rights activist Stokely Carmichael coined the phrase "Black Power" with the symbolic image of the raised black fist to embody it. A charismatic, forceful, young and brilliant intellectual with civil rights rooted in non-violent tactics, Carmichael became increasingly dissatisfied with racial inequality. This led him to more militant approaches to achieve political self-determination for African Americans. The book, Stokely: A Life, winner of the 2014 Benjamin L. Hooks Institute National Book Award, provides an illuminating profile of Carmichael's journey of disappointments, conflict, and hope for a more just nation and world.

2013 | How it Feels to be Free: Black Women Entertainers and the Civil Rights Movement

by Ruth Feldstein (Oxford University Press 2013)
Press Release: How it Feels to be Free

2013 | On the Corner: African American Intellectuals and the Urban Crisis

2012 | The Black Revolution on Campus

2010 | Hands on the Freedom Plow: Personal Accounts by Women in SNCC