The annual conferences of the Hooks Institute are signature events at the University of Memphis (UofM) and greater community. Conferences are constructed around in-depth explorations of local or national problems that might provide strategies or tactics for addressing local concerns in Memphis. To encourage maximum attendance, the Hooks Institute does not charge conference participants a registration fee. The Hooks Institute believes that it is imperative that most, if not all, conference events remain free to the public in order to encourage social change at the grassroots level.

Selected Past Hooks Conferences and Symposia

Education as a Civil Right and Economic Driver: Empowering Individuals for the 21st Century and Beyond, April 8-9, 2010.

National and local leaders gathered at the UofM to explore the idea that a quality education should be a constitutional right that will create economic opportunities for individuals and their communities. Sessions covered such topics as the critical role of science education in maintaining U. S. competitiveness, legal challenges and remedies for deficiencies in public education, the economic mobility created by a post-secondary education, and educational reform initiatives in Memphis.

The Obama Phenomenon: Race and Political Discourse in the United States Today, April 3-4, 2009.

The historic election of Barack Obama to the presidency of the United States and the implications of that event for the nation were the subjects of a major conference sponsored by the Hooks Institute at the UofM. Scholars from around the nation explored expressions of thought and public reaction to persons and events associated with Obama's candidacy, including media images of Barack and Michelle Obama, the potential impact on minorities of President Obama's proposed public policy agenda, the use of Islamophobia against Obama, the question of the "post-racial society," and interpretations of the Obama candidacy by critical race theorists. 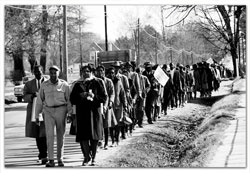 The Fayette County, Tennessee Civil Rights Movement: How African Americans Changed Themselves, Their Community, and Their Nation By DEMANDING THE RIGHT TO VOTE, OCTOBER 27-28, 2006.

Fayette County civil rights activists, community members, and scholars gathered at the UofM to honor movement activists, hear lectures and commentary placing this movement into the historical context of other notable civil rights events and to discuss its relevance to issues of equality today.

The architects of the 1968 Sanitation Workers Strike in Memphis gathered at the UofM with union organizers, labor activists, clergy, and people of faith. The conference's goal was to promote unity of purpose among these groups with the hope of developing a common agenda for examining and working on labor issues.

The Center for Research on Women at the UofM and the Hooks Institute convened this multidisciplinary, international symposium that addressed social inequality and social justice activism, both locally within NAFTA's signatory countries and across borders.

The Civil Rights Movement in Memphis, 2004.

From Outsider to Insider Politics: African American Political Power and the Mayor's Office, 2004.

David N. Dinkins of New York City, Richard G. Hatcher of Gary, Indiana, and Willie W. Herenton of Memphis discussed their experiences as the first African-American mayors of their respective cities and the broader implications of the transition in urban leadership for American society and democracy.