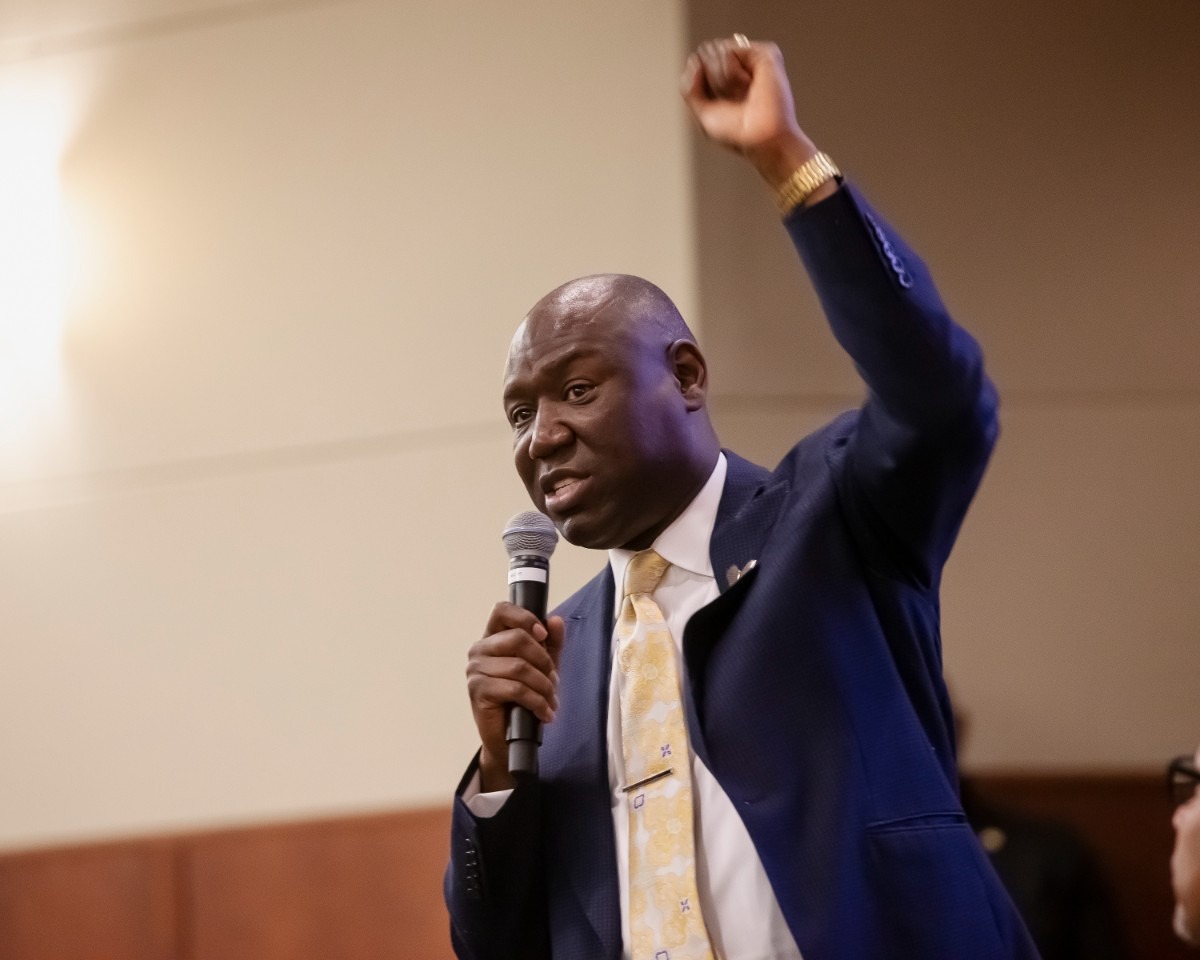 A group of national speakers visited Memphis Monday, Nov. 7, to join local leaders and community members in discussions about bail reform and overpolicing.

In partnership with the Equal Justice Now organization, the Memphis Law Black Law Students Association (BLSA) organized the event here in the Mid-South.

Asked about why it was important for a student organization like BLSA to host such events, current BLSA president, J. Alex Sanders said "I believe it is imperative that we continue to have events such as this that shed light on issues that are affecting our community daily. I am grateful that in my capacity as BLSA president, I was able to work with Thomas Lucas and his team from Equal Justice Now in making this event a success."

The traveling national panel discussion was hosted by Ben Crump, the civil rights attorney who has represented the families of George Floyd, Breonna Taylor, Trayvon Martin and Ahmaud Arbery. The event took place one day before the midterm elections.

“As I think about this election, Ben Franklin said that democracy is like two wolves and a lamb voting on what to have for lunch,” Crump said. “But he said liberty is making sure that that lamb is well armed to protest that vote. And so we have to make sure that our young lambs in our community are well armed, not with guns or bullets or any means of violence, but that young lambs are well armed with intellect and diplomacy and strategic thinking to be able to go out and protest …”

Crump has also brought the national panel discussion, presented by Equal Justice Now, to Los Angeles and Houston. The next stops will be Baltimore and Charlotte, he said.

The panel was moderated by Eric Kowalczyk, a former police officer, and Pam McKelvy Hamner, a former local news broadcaster. 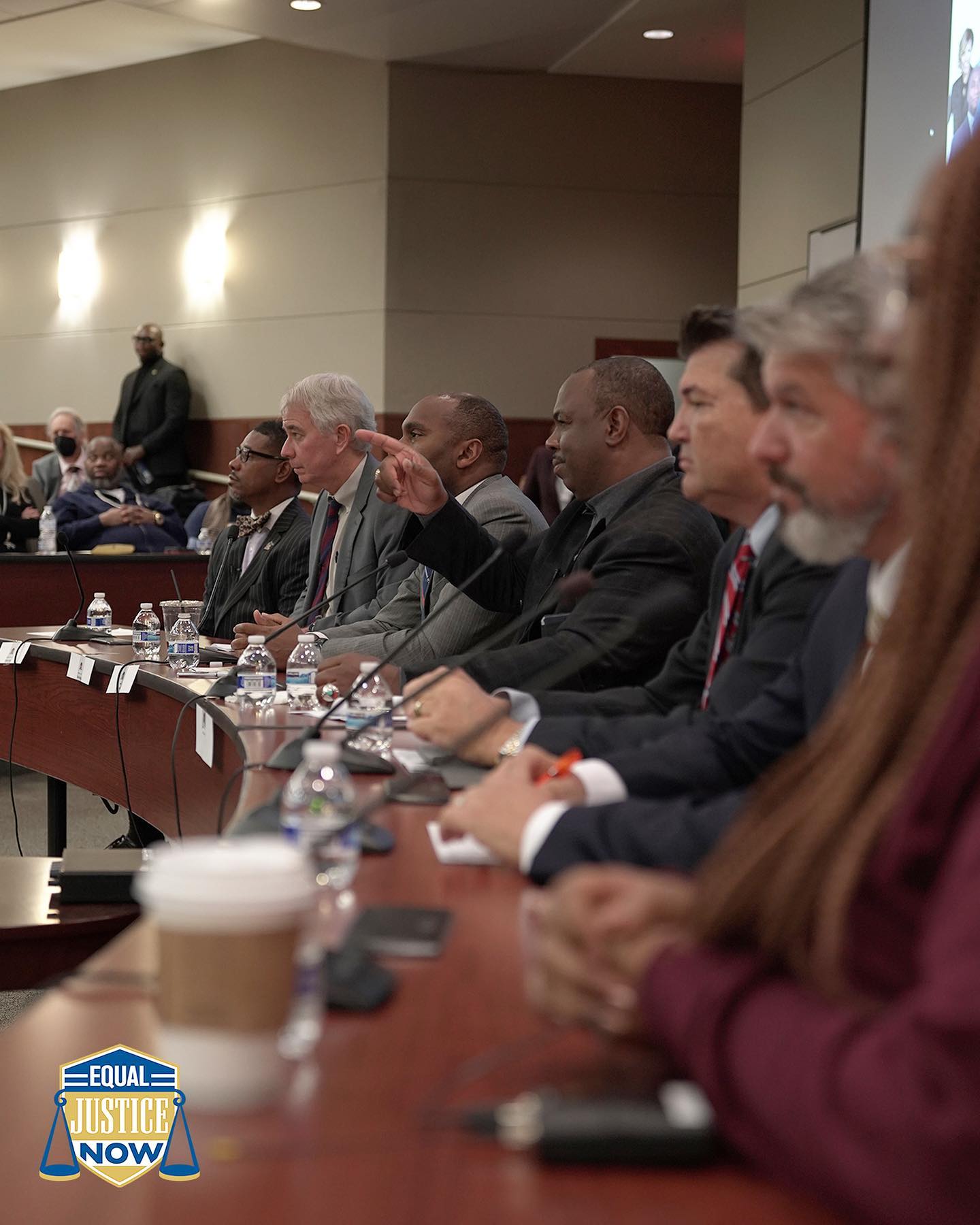 The first topic in the four-hour panel discussion centered around bail reform. Although most speakers felt there should be some sort of bail reform, their opinions on the level of reform differed.

Some, like Mulroy, felt whether bail is instituted should be determined on the level of offense, criminal history and “surrounding facts and circumstances,” such as whether the person is a flight risk or a danger to the community.

He mentioned a new bail reform in Memphis that will ensure defendants get a prompt bail hearing within 48 hours of their arrest. Their financial standing also will be considered.

“We need to have a fairly detailed inquiry into what the realistic financial means of the defendant are such that the bail should be affordable to that person,” he said.

Jones, a Black Lives Matter activist, said her daughter was initially issued a $100,000 bail for possession of marijuana and drug paraphernalia.

She said jail — not bail — should be the penalty. She also said there should be a balance between determining what is good for the victims, the accused and the community.

She said many defendants miss their court dates because of a lack of transportation or reminders.

Attorney Ken Good supported keeping some sort of bail in place, saying it has the “lowest failure to appear rate of any release mechanism that’s used today.”  (Ziggy Mack/Special to The Daily Memphian)
Good disagreed, saying bail keeps defendants from skipping their court dates. He said it’s an integral part of the criminal justice system.

Dixie, who is also a bail bondsman, said bondsmen act as U.S. Marshals on the local level, and they remind their clients of their court dates.

“If you don’t go to court, guess what? We go get them,” Dixie said. “And you know one other thing we do as bail bondsmen, what we’re forced to do by law, is notify each defendant, each client, of their court dates.”

Towns said judges, who are the individuals who set bail, should be held accountable.

Harris agreed, saying there should be statistics on judicial performance.

“I think there is some area of consensus building around really understanding the performance of judicial actions,” he said. “And so one area where all of us may agree is if we did have statistics on judicial performance, then that would be very insightful as to what judges are doing across courtrooms.” 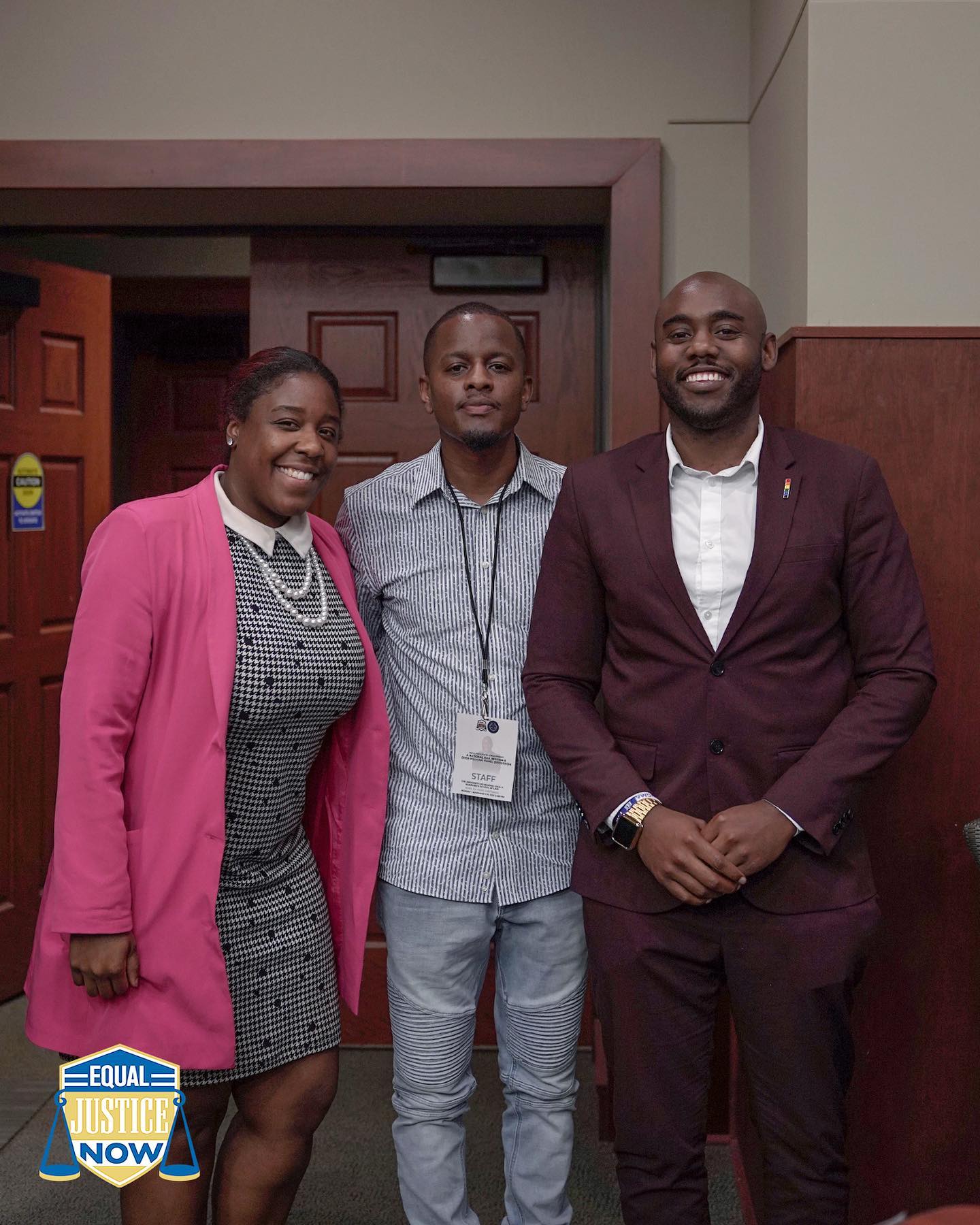 The second discussion of the evening centered around overpolicing, beginning with an Instagram video of two instances of police brutality. One clip showed a police officer threatening to break a woman’s window unless she showed her identification; another showed a man lying on the ground in handcuffs, being kicked and beaten by two officers.

Rawlings-Blake said while most officers have an attitude of public servitude, some officers are driven by their egos rather than attempting to solve a problem.

“The vast majority of the officers that I had the pleasure of working with serve with that same spirit,” she said. “And it pains me to see these officers — when you see an officer who can’t control his behavior … that is escalating instead of de-escalating, who’s clearly ego driven and not in problem-solving mode, he should not have on that badge.”

A 2016 report by Spectrum News says a study pulled data from the Los Angeles and Cincinnati police departments and found that “male officers are over eight and a half times more likely than their female counterparts to have an allegation of excessive force sustained against them.”

In March, the Memphis Police Department was made up of 17% women; leadership hopes to increase that to 30% by 2030.

“As long as that mentality is left there, you’re never going to solve this problem,” Attorney Glen Jonas said of the idea that police officer’s egos contribute to police brutality. (Ziggy Mack/Special to The Daily Memphian)
Jonas said he worked with civil rights lawsuits and that police brutality was rampant in the LA County Sheriff’s Department.

He said what contributes to the problem is an attitude that starts from the head of law enforcement agencies and trickles down to the officers. He also said agencies often have an “us versus them” mentality.

“As long as that mentality is left there, you’re never going to solve this problem,” he said.

Some of the attitude can also be attributed to overtime, Rodriquez said.

“When we have a decrease in staff, and you’re forcing people to work overtime, now the morale goes down — their ability to deal with difficult situations,” Rodriguez said. “It’s a Catch-22.” 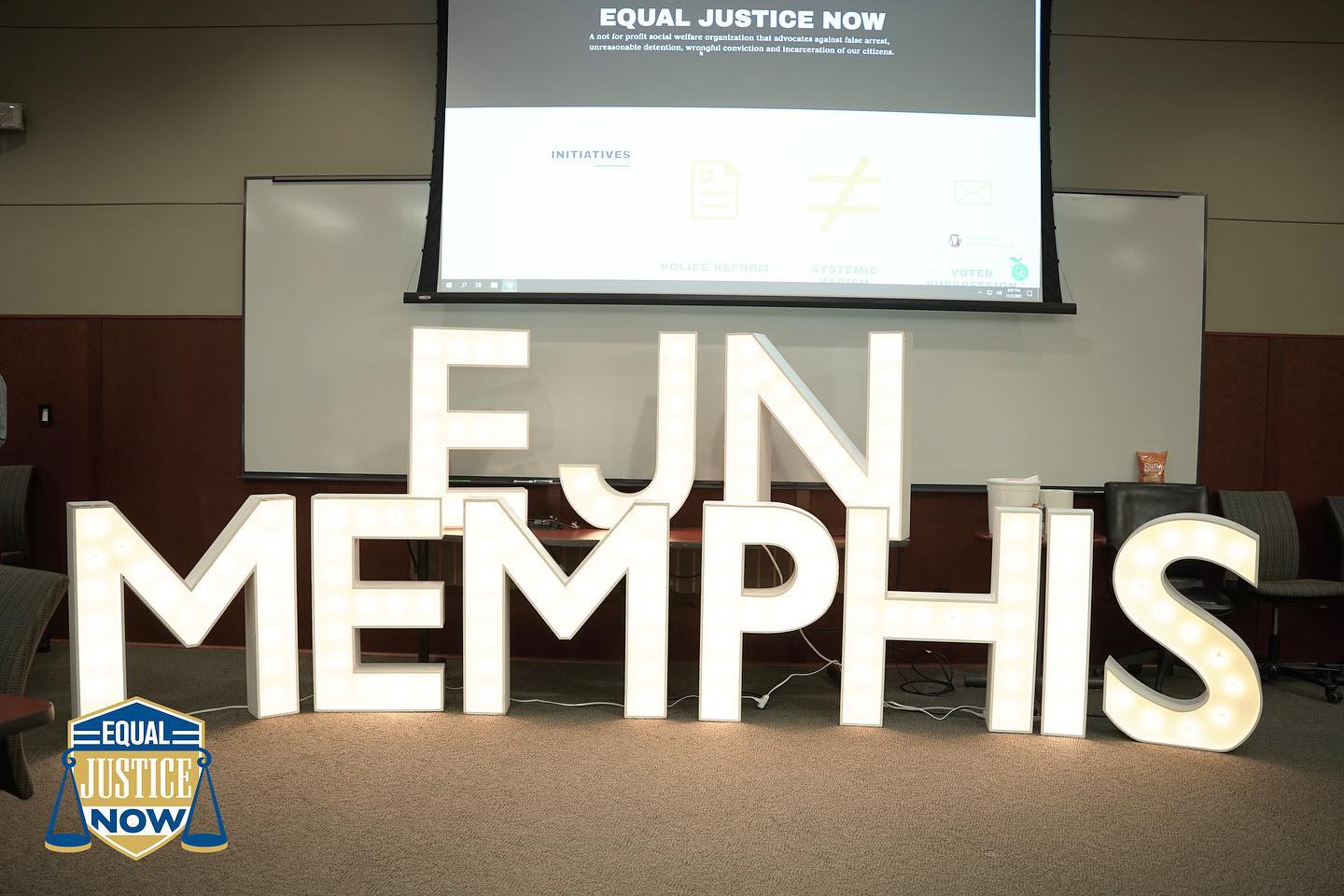 Franklin does not agree with the number of police officers seen in public, such as in banks and schools; he says those are examples of overpolicing.

“It has put them too far into our personal and private lives,” Franklin said.

But Jonas disagreed, saying, “A law is not a law if it is not enforced. It’s just a good wish, then. And good wishes don’t work.”