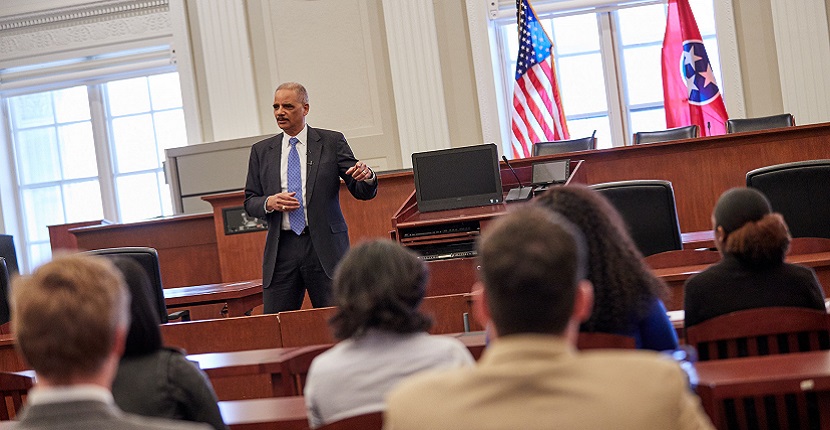 Much like Dr. Martin Luther King, Jr., the man he was in Memphis to commemorate at the law school's symposium, former U.S. Attorney General Eric Holder sees hope in what sometimes seems a hopeless world. He also sees young people as a key to that hope blossoming in our country.

"You all are the best and the brightest," said Mr. Holder in a special Q&A session with Memphis Law students. "I tend to think that the 21st century is going to be another 'American' century, because of people like you."

Holder spoke to a crowd of Memphis Law students, faculty and staff in our Historic Courtroom while in town to serve as the Keynote Speaker at the law school's MLK50 Symposium, "Where Do We Go From Here?," a collaborative two-day symposium with the National Civil Rights Museum where the law school presented the first day of events at the Peabody Hotel in downtown Memphis.

Mr. Holder took time to conduct a very informal Q&A session and make brief remarks at the law school. While weighing in on current issues and reflecting on his time in the Obama administration, he also imparted some words of wisdom about law school and the legal futures of the soon-to-be attorneys gathered in the courtroom.

"Whether you are Republican or Democrat, Liberal or Conservative, don't lose what I think you have right now, which is a sense of idealism," counseled Mr. Holder. "I'd hope that you want to make your mark on this nation and I know you want to take this country to a better place. It's going to be up to you all to make real progress and foster the dialogues that move us forward as a nation."

Holder served for six years as the 82nd attorney general of the United States under former President Barack Obama. Since leaving the Justice Department, he has rejoined the law firm Covington & Burling LLP as a partner advising clients on complex investigations and litigation matters. Additionally, he is leading an initiative focused on gerrymandering and redistricting for an organization called the National Democratic Redistricting Committee.

During the Q&A session, Memphis Law student and Law Review Editor-in-Chief George Scoville posed a question touching on this work and inquired about the worries that Mr. Holder might have about the Court "entering the political thicket" in the area of partisan gerrymandering.

"Even if you do nothing as the Court, you are making a political statement there," said Mr. Holder. "I think the Court is still trying to figure out where they are going to go and how they are going to get there. My hope is that the Court will say that line-drawing and redistricting is inherently political and it can go too far. I think if the Court simply says that, I think that would give the National Democratic Redistricting Committee the tools we need to get into court and challenge things that an objective observer would say need to be fixed," Mr. Holder said. Noting that his organization's chances of success were in line with the country's feelings, he noted, "There is a growing awareness among the American people about the problem of redistricting and how it impacts their lives."

"I'm proud of what we did and there were times when you had to pinch yourself," said Mr. Holder. "There was a time once upstairs in the White House residence when we were having dinner and I looked around and everyone in that room was an African American and I thought to myself 'This has probably never happened in this house before,' and it was pretty amazing."

"I was also laughing because the President had music piped into the room and we were playing some John Coltrane, maybe some Tupac, and I'm betting that was the first time Tupac and Biggie were played in the White House, so it was historic in a lot of big ways and smaller ways like that as well."

Former Attorney General Holder closed on the same optimistic, yet practical, note that he began with. Building on words often spoken by Dr. King, Holder said that, "The arc of the moral universe is long, but it bends toward justice," while elaborating upon that by saying "Well, that is true, but only when people like you put your hands on that arc and pull it towards justice."

"You all have that unique responsibility as lawyers to bend that arc," Holder said. "You have that ability, but you also have that responsibility. Every one of you as an individual can have an impact on what our society ultimately becomes. I have faith in you and I want you to have faith and confidence in yourself. Be change-agents. Be agents for the good. You can do it."