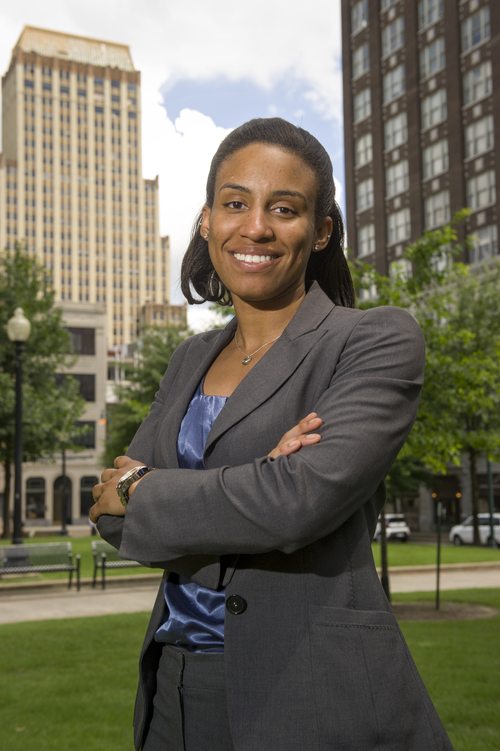 The City of Memphis provided the law school with $150,000 of funding to support this unique position through December 31, 2017, with proceeds from its Vacant Property Registry used to fund the unique partnership. As part of the agreement, the "Neighborhood Preservation Fellow" must be a Memphis Law graduate, with preference given to a graduate who has successfully completed a semester in the law school's Neighborhood Preservation Clinic, or participated in the anti-blight litigation externship with the City of Memphis Law Division.

Brittany Williams, a Class of 2015 Memphis Law graduate, was officially named the first Neighborhood Preservation Fellow in Summer 2016, only one year after successfully graduating from law school. Prior to her appointment as Fellow, Brittany worked for the law firm of Brewer & Barlow, PLC as a law clerk and in March 2016 was named the Interim Neighborhood Preservation Fellow before her official appointment in June of 2016.

"Our efforts with the City of Memphis to fight blight allow us to not only help the city itself, but also give our current students, and now our graduates like Brittany Williams, the ability to play a front-line role in this critical fight," said Dean Peter V. Letsou. "We are training our students to tackle a problem that lacked a focused solution before this partnership and, in doing so, we are helping to provide Memphis with specially trained attorneys to alleviate this blight epidemic."

The fellowship adds yet another component to the law school's and the City's dedicated fight against blight in the Mid-South. The law school and the City of Memphis last year announced the creation and launch of the Neighborhood Preservation Clinic, a partnership between the law school and the City's legal division that allows law students to earn real-world experience for law students in issues of blight, property abandonment, and neglect through the handling of cases in the Shelby County Environmental Court. The clinic is co-directed by local attorney and Memphis Law adjunct faculty member Steve Barlow and Assistant Professor of Law and Director of Experiential Learning Daniel Schaffzin. Over the past year, law students in the clinic have studied the laws concerning real property abandonment and neglect in Memphis, and worked with code enforcement officers to prosecute civil lawsuits filed pursuant to the Tennessee Neighborhood Preservation Act. The clinic and the City celebrated the filing of the City's 1,000th lawsuit against blighted property owners during the fall 2015 semester.