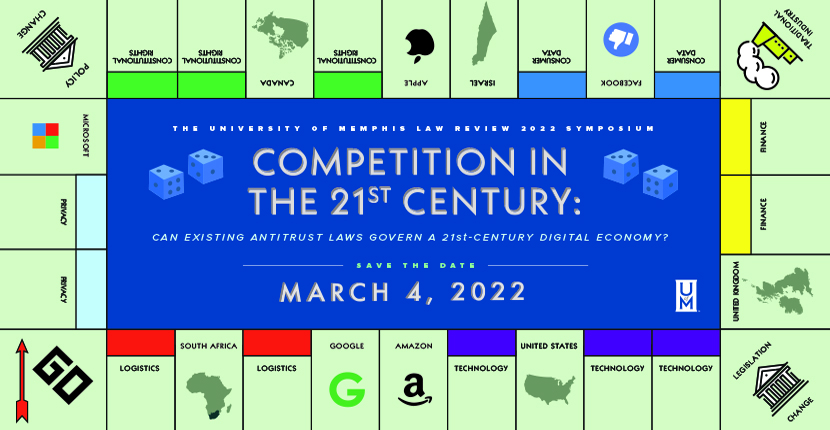 COMPETITION IN THE 21ST CENTURY:

The University of Memphis Law Review will explore whether existing antitrust law is sufficient to govern a 21st-century digital economy. Modern antitrust law in the United States has developed from the original passage of the Sherman Act in 1890 to a system largely focused on protecting the competitive process and increasing consumer welfare. Is this approach adequate for the rapidly changing digital economy of the 21st-century, where some claim that companies like Amazon, Apple, Facebook, and Google are reminiscent of the oil and steel trusts which motivated the original passage of the Sherman Act?

CLE credit has been requested. Information on registration and potential for virtual format will be updated on this page as available. For more information contact Symposium editor, Lexie Haralson at ljhrlson@memphis.edu.

The University of Memphis Law Review hosts its annual symposium every spring at the Law School. For more information about the most recent past topics and speakers, please visit the links below.

2019: Barriers at the Ballot Box: Protecting or Limiting the Core of the American Identity?

2018: The American Addiction: Pathways to Address the Opioid Crisis

2017 - The Fragile Fortress: Judicial Independence in the 21st Century

2016 - Urban Revitalization: The Legal Implications of Remaking a City

2015 - In re Valor: Policy and Action in Veterans Legal Aid

2013 - Breaking the Silence: Legal Voices in the Fight Against Human Trafficking

2012 - Cultural Competency and the Death Penalty